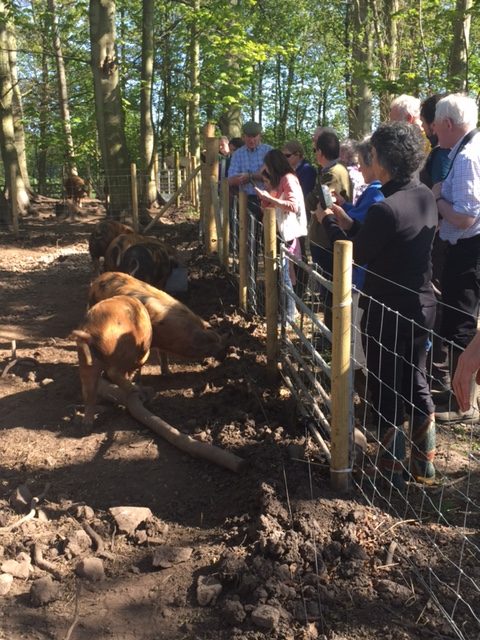 On Saturday 6th, we welcomed 29 intrepid members and friends of the Rare Breeds Survival Trust to Parkhill for a “Piglets to Pork” Open Day.

We began with a walk around the farm, which involved a lot of talking to the pigs on the way. As usual, the Large Black sows were very chatty, and the Oxford Sandy and Black Piglets managed to put on a bit of a show despite the fact it was quite warm. Jack the Boar stayed resolutely as far away as he could, lying in the sun. We talked about our breeding plans and our thoughts on the future – do we get a Large Black Boar as well?

We then walked down to the lower paddocks past the Hens and into the sheep field where the Portland’s proved once again that they can outwit even the most experienced shepherds! Then back past Ollie and Georgie, our Golden Guernsey Goats, to see the four British White Cows.

As is usual with RBST Caledonian gatherings, the blether was full on by this time making it difficult to get a word in edgewise! So we settled down by the Barn for a Pork Barbecue. The Pork and Apple Burgers proved to be extremely popular, and the four different types of sausage all had their champions. As the Barbecue cooled, we also threw on some bone in pork chops which went down a treat.

It was great to see everyone on this, our first gathering of the year, so we now look forward to the show season and more socials!

Many thanks to Nicola Nicol for the photo!