That was the week that was……

HomeUncategorisedThat was the week that was…… 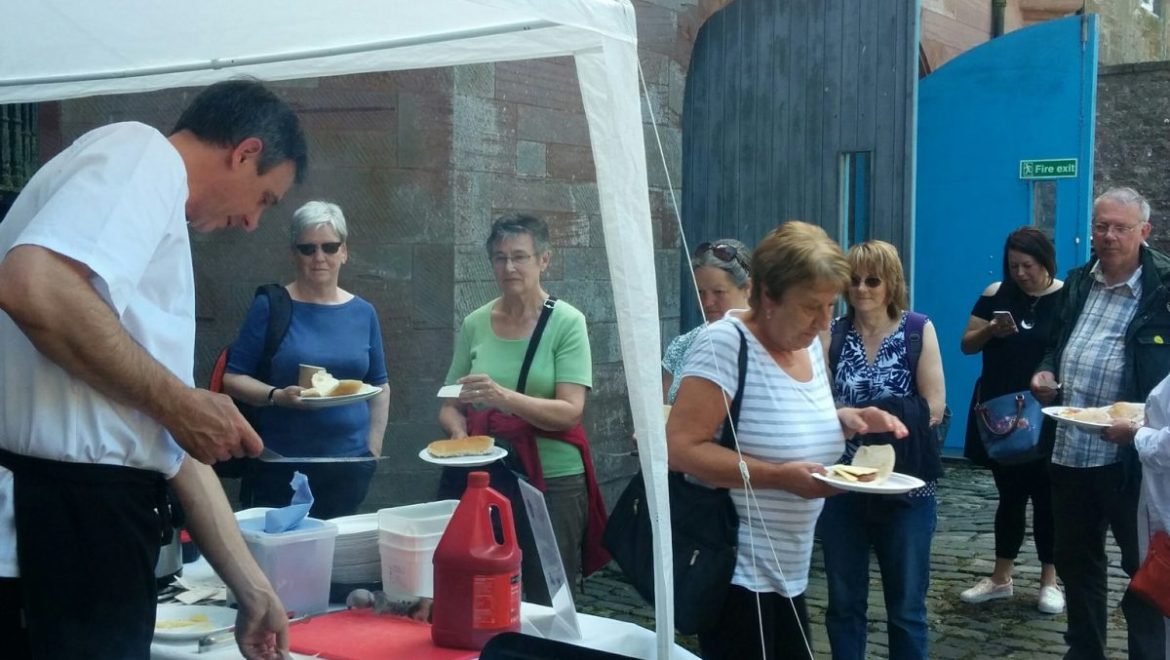 This week has been horrendous, but there is always light at the end of the tunnel and it came for us in the form of customers at the Hospitalfield Arts ‘Beer and Berries’ event who liked our sausages and burgers – please follow Hospitalfield Arts on twitter.com/@hospitalfield – we managed to get along for an hour to see it in full swing and met other friends and local producers twitter.com/@bouvrage and twitter.com/freshfoodexpres – all part of Hospitalfields Festival and part of twitter.com/@tasteofangus . The chef at Hospitalfield was cooking our Pork and Apple Burgers, Hog Roast, Caramelised Onion, and Premium Pork sausages, and they looked to be going down well!! Hospitalfield is a magnificent place and is well worth a visit, with a great garden that was also open yesterday under the Scotland’s Garden Scheme.

But this came at the end of a very difficult week. One of our two original OSB sows farrowed on Sunday, it was a huge litter with two stillborn leaving 14 live piglets. It was clear from the start that something was wrong – she was clearly in some pain and exhausted – we kept an eye on her Sunday and she was feeding the piglets but not doing much else. By Monday morning it was clear that she was in real difficulty so we rang the Vet at 6 in the morning, and he came out to check her over. She was walking with great difficulty, she did not have much milk and was showing no maternal instinct whatsoever. Following treatment including a pain killer and a shot of oxytocin she seemed to rally a bit, and we put up new gates etc to keep her inside her pen area so that she could feed as the piglets were by this time looking really thin. It is vital that the piglets get the colostrum from their mother within the first day and we believe that she did that, but as her feet started hurting she was not producing milk as she should have been, and she was barely eating. On day two she broke out of her area and lay on the soil outside, unfortunately trapping two piglets beneath her. She could not walk properly at all, and no-one seemed to have heard of it before. We spent much of the day preparing to take the piglets away as she kept standing on them as she could not lift her feet quickly enough.

On day four, she was in her Ark but could not get up. She had clearly been lying there all night and the piglets had just been tucking in, all night. She had no energy at all. Vet came out again, and we managed to coax her out with the two of us pushing and Jackie offering food. Once she had staggered out he was able to examine her – the conclusion is that she has laminitis which is very rare in pigs and which may have been brought on by the stress of the litter. So we needed more medication, which ended with us trying to pin her in the corner whilst the Vet injected her. She did not like this, and managed to launch me and the gate into the air and against her Ark. Painful for her, and for me.

But it seemed to have done the trick – on Friday she was showing signs of interest in food again, and by Saturday she is almost back to her old self. The piglets are doing well – two of them are giving us some cause for concern as they have damaged legs, but they are all putting on some weight which is great.

But farming can still get back at you – just as one problem shows signs of improving, then another comes along. We have had a visit from the fox and obviously a number of cubs. Half of our laying flock gone with only a few feathers on the ground to show that they had ever existed. So we have had to stop our egg run for a while as the remaining hens are so traumatised that they don’t want to lay so our numbers are right down. More fencing, more hens, more stress….

Picture was borrowed from Hospitalfield Arts!